The Future Of Mankind {part II}

As promised here is the development work for the TBWA London virals inspired by 1950's Sci-Fi B-Movies.
Once again I loved researching reference for these projects as for one I love the genre and have always been a big fan of Sci-Fi, especially the A-Bomb generation of science fiction films. 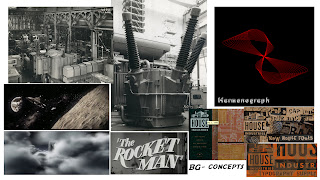 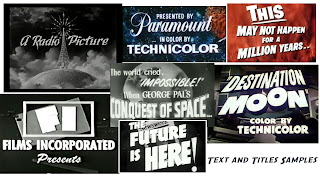 First of all I put together some images I presented to the agency along with some sample storyboards of the ideas I had going on, which myself and Ben Campbell (producer Rampage Studios) pitched.

As usual I wasn't given a lot of time at this stage and produced some reference boards and original boards to go with my written pitch in about a day. 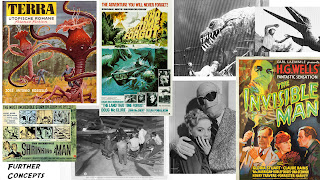 I wanted the films to seem as if they were produced and presented by a classic 1950's film studio, and although the original concept called for these films to appear as if they had been made in a garage by one individual with very low-tech, I was permitted to design an animated logo which started each film.
I took inspiration from old RKO, classic Paramount and Films Incorporated title cards. 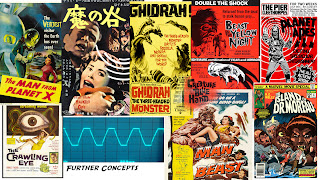 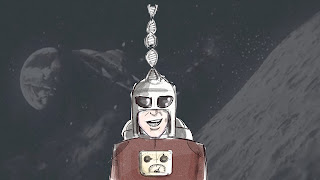 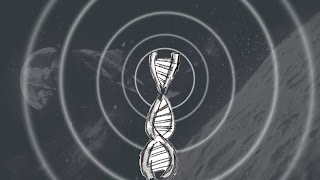 The agency liked the direction we took and allowed us to elaborate our storyboards for a few more days before we started designing all the graphic elements contained within each film. 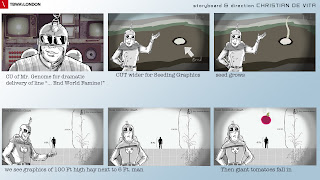 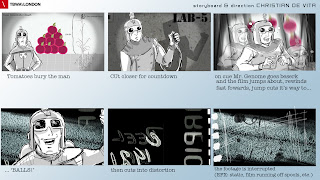 Here are two of the storyboards I presented to the agency in order to give them a complete overview of what I had planned to film and animate.
Coming from an animation background I always tend to storyboard in a rigid manner, imagining on paper what I aim to film. Once on set though I find the storyboards can be quite restricting at times as other elements come into the fray: the limitations of the set, the lighting, technical elements I did not foresee or consider, what the actor brings to the performance. 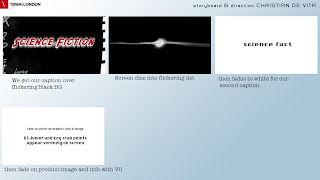 I had some time to work with the actor (Boris Hiestand) prior to the shooting day yet what he brought to the performance on the day was hilarious, and the energy he put into it, considering the weight of the jet-packs and costume under the studio lights,
was amazing. 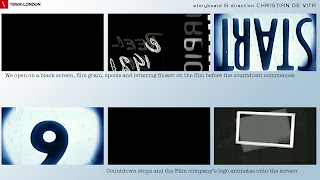 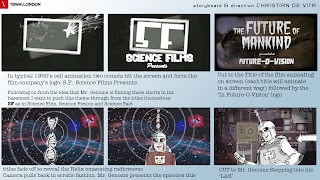 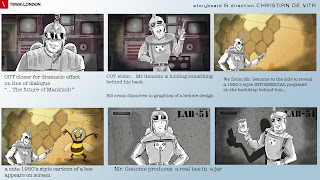 The storyboards had to be produced swiftly as not only we needed approval from the agency at every step of the production, but we also needed to source all elements I wanted as well as designing anf animating all the ideas I had conceived.
You can see some examples in these two storyboards of some of the ideas which Daniel Thomas from Rampage Studios then took and designed and animated for the final films. Great guy and great work! 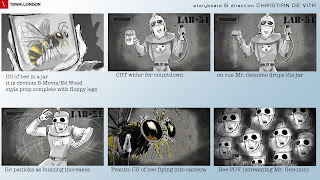 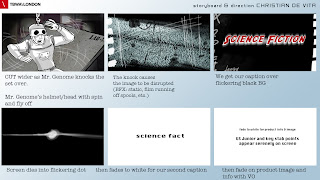 For the third and final film in the series though I wanted a very home-made, classic B-Movie monster moment and hired puppet maker Magdalena Bieszczak to build a scary looking bee based on the design below.
The effect of a puppet with its mandibles dripping in vaseline and KY gel flying at the camera lense hanging by a very visible wire was exaclty what I was looking for... I feel Ed Wood would have approved! 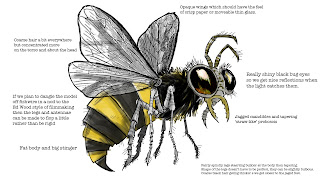 I hope you enjoy the films as much as I enjoyed making them!

THE FUTURE OF MANKIND