Another Six Nations ends with my beloved Italy taking the wooden spoon one more time.
For all the strength and grit and determination and pain and sweat and tears, Italy regrettably underperforms
on a number of occasions and at decisive moments of the game.
Lost line-outs and un-scored penalty kicks will haunt the team for sure, but we will always savour the idyllic joy of beating France for the first time in Italy's Six Nation's history.

Andrea Masi's try made me jump out of my seat and shout so loud I made my son run for cover.
And Mirco Bergamasco showed nerves of steel after the disappointingly missing the second kick of the game, to take the crucial final two penalties which gave us the winning points.

The tearful and joyful scenes in front of a Rome home crowd meant so much to players and fans alike, it looked like we'd won a World Cup.

I always thought many of the Italian, and also French, players had fantastic faces, the sort of faces you see in pirate movies, or in swashbuckling period adventures.
Mirco Bergamasco would be a marvelous Picaresque bandit from the 17th Century...

So here he is, my homage to one of our heroes from a famous victory over the French... 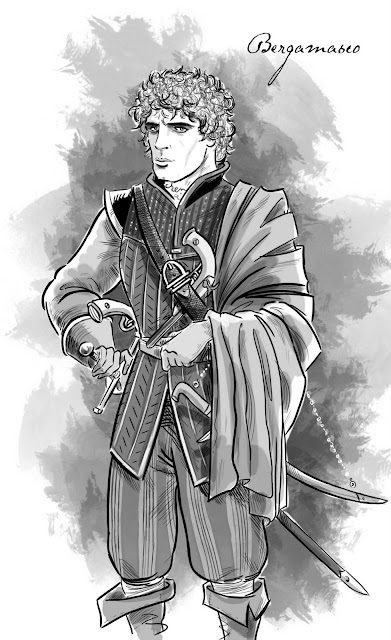