It's happened again.
You know that feeling you get in the pit of your scrotum when one of your childhood or teen memories gets urinated upon from a great height?
First Spiderman, then Dare-Devil, The Hulk, Star-Wars... Now Dylan Dog.

For those who have yet to come across the Italian comic book, Dylan is a beautifully rendered black and white monthly from the Sergio Bonelli publishing house that stars a London based detective who deals with the occult and paranormal.
Each issue was pencilled and inked magnificently by different artists and written with a vein of poetic melancholy which stemmed from creator and writer Tiziano Sclavi.

It all started in the Autumn of '86 on a particularly dreary October day, when one of my regular trips to the newsagent produced the first issue of Dylan Dog, L' Alba Dei Morti Viventi... The Dawn of The Living Dead.
From that very first hundred page issue I was hooked. Falling in love with the dark subject matter; the gory black ink scenes of flesh being ripped of the bone by hungry zombie teeth; the foggy London setting which reminded one of times gone by in which Jack the Ripper, Doctor Phibes and the Werewolf may have co-existed; and the characters.

Those wonderful characters that had so much depth and life for a comic.
Dylan with his Rupert Everett features sitting on his favourite chair playing The Devils' Trill on his clarinet.
Inspector Bloch who's hang-dog sad face reminded you of a depressed Alfred Hitchcock.
Abraxas, Dylan's arch enemy.
And last but not least Groucho. A man who looked like Groucho Marx, sounded like Groucho Marx, told endless jokes like Groucho Marx, but couldn't possibly be the real Groucho Marx... Or could he?

Although vampires, ghosts and the undead were real in these stories, in the end of each issue you were always left with some doubt, a shadow clouding your beliefs, and most ghouls turned out to be misunderstood as the most evil monsters of all were in effect humans.

I bought and still own every issue up to 200.

Although Sclavi has progressively become less involved in the series Dylan Dog has reached wider audiences with it's publication in the UK and the US by Dark Horse comics.
This new found fame has prompted Hollywood to take notice... And produce a film.

Now, I haven't seen the film. It could possibly be a worthy adaptation of the original source material. It could even be one of the best horrors of the decade.

But I doubt it.

Judging by the trailer alone the action, like in Constantine, has been relocated from London to the States. Dylan seems to have become a smug self-confident investigator-scientist-adventurer that deals with the crimes of the undead, rather than be the romantic loner he is in the original comics.
Worst of all Groucho appears to have been replaced all together by a fast-talking, nerdy, twitchy side-kick which ironically I suppose is there for comic relief.
It all seems to lack the surreal tone, black humour and melancholy of the comics and looks to be much more light-hearted and action-orientated.

The film is due for release April the 29th and I think that on that day I'll reach up to the top of my bookcase, take my copy of the first edition of Dylan's L' Alba Dei Morti Viventi and relive one of my teen loves. 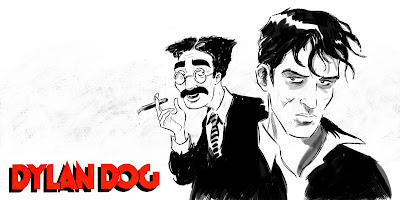