Here is one shot I was very happy to see in the movie as I originally storyboarded. 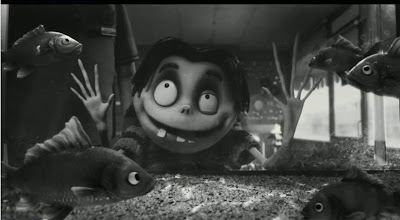 It's almost Zen in it's simplicity but this is what I like about storytelling, at times you don't have to have complicated camera moves, intricate and elaborate cuts and editing, you can go straight to the point and give the exact amount of information needed while keeping the gag as strong as possible.

I opted for a straight on, flat composition that framed the character within the fish tank, dead centre of screen. I imagined this composition to work well in 3D especially when combined with a gentle camera move, a Dolly out, passing several fish in the process, then easeing the camera to a stop when the punchline comes in.

The following scene, with the dead fish experiment was storyboarded by the extremely talented (AND hard working!) Rob Stevenhagen, the head of story.