I guess with the film finally out I am able to post a few (very few!) storyboard panels from some of the scenes I worked on.

I have now had the leasure of seeing the completed film 3 times and for me it seems to get better with every viewing. At first I had to let go of my personal baggage I had with the film; my personal and work experiences. Then I had to let go of all the good ideas that were thrown around and storyboarded that never made it into the film (I always find this process hard, yet always keep in mind I work to aid the director in visualizing his story).

Finally I started seeing the film with fresh eyes, and really digging it for the spectacle it is: a beautifully animated, black & white, 3D horror movie for kids!

A proper little gem of a film.

These random panels are specifically from the third act, when all the monsters come to life and mayhem ensues. 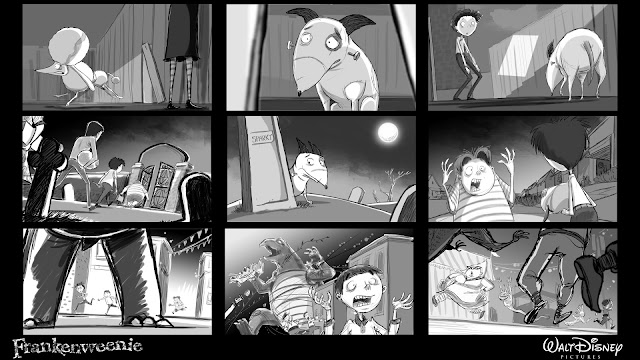 It was great fun working on these sections of the film, coming up with ideas on how the experiments and transformations would work, brainstorming with the rest of the team on how we could kill off each monster.

We would discuss the several passages of the script that needed elaborating on then take our scenes and draw like crazy all the different ideas we came up with- sketching all the classical ways of killing vampires and werewolvesa and ghouls: garlic, silver, crosses, holy water. Then putting a comical or quirky spin on it.

It was also a great opportunity to rivisit all those classic horror films I grew up with back in Italy.

There were a few TV channels that would show old Universal horror films all the time (and plenty of westerns and Laurel & Hardy!) as well as other less classic ones: Abbot and Costello meet Frankenstein, the Woflman vs. Dracula, Frankenstein meets the Wolfman, etc. 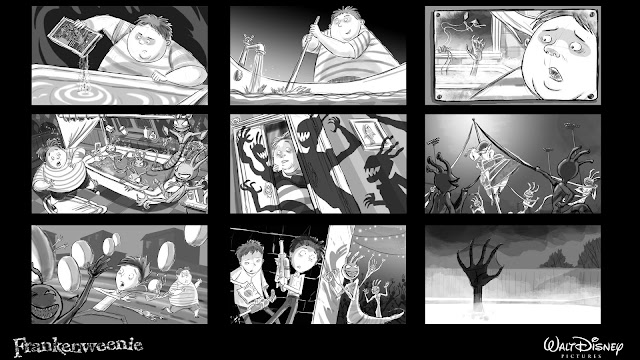 It was cool to learn that Tim's inspiration for this version of Frankenweenie came from the same pool of comedy infused horror films, so I got to revisit some of the films of my childhood, while claiming I was doing 'research'! 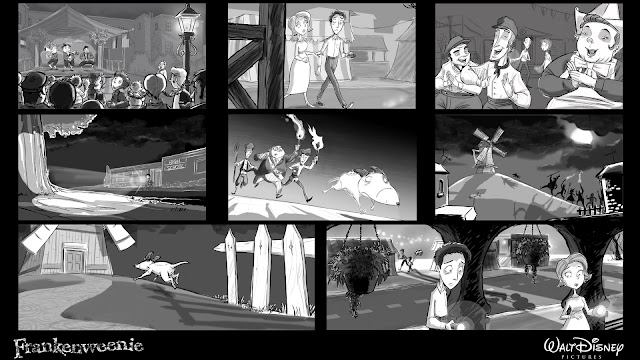 I was always lured by the darkness of these black and white films, a darkness so deep any monster could hide in it and suddenly seize you and drag you into it.
I always work in black and white, rarely with colour, and my monochrome palette was totally inspired working on this project.
I tended to work a quick rough pass of a scene in Storyboard Pro, then rework panels in Photoshop (CS3) using a variety of brushes to achieve some airbrush effects, wet paint effects and dry brush effect on particular areas of my drawings. I felt this helped get the moods right of some of the more dramatic and atmospheric scenes, especially with the transformations of the monsters. 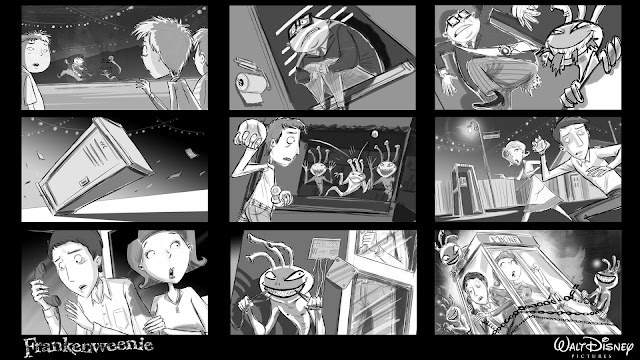 A scene I most proud of was the 'scary' moment with the dead rat... It made my 8 year old son jump in his seat when we saw it together.
I won't spoil it by posting the board for it now, you'll just have to go see it at the cinema.
And if you do keep an eye out for one of my most succesfull jokes in any projects I ever work on... All I will say is 'SHELLEY'! 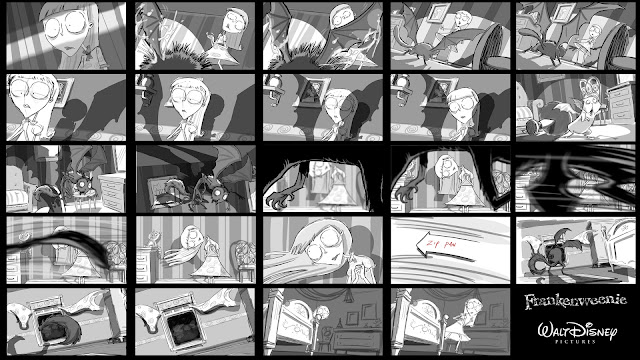 I hope you enjoy the film as much as we did working on it.

Heck yeah! These are great, thanks for posting.

You're welcome Casey.
Glad you enjoyed them.

Thanks!
And Happy NEw YEar!