a small tribute to a grand artist

Last week, on the 10 of March 2012, French comic artist and legend Jean Giraud passed away.
He was known to a multitude of fans as Moebius, or Gir, and will always be one of my greatest inspirations.

As a child my first comic book love was Westerns, very popular in Italy from the '50's on, and although I was a fan of Tex Willer I came to read the Blueberry series around this time.
I came to love Moebius' style, which seemed to vary from comic to comic, as he dramatically changed his graphic style as he implemented innovations to his techniques.
I was very taken though by his surreal, sci-fi and fantasy comics, influenced by his experimenting with drugs and New Age philosophies, and his works were amongst the first to inspire me to follow a path into any form of drawn art work.

It is because of great artists such as Moebius that I wanted to draw, to have a career in comics, animation, films, and for this I pay my respects to the man who, through his marvellous creations, gave me so much pleasure in my youth, and still does today.

I raise a glass of vin rouge to the great Jean Giraud and clumsily offer this pastiche of a Moebius inspired sketch to him. 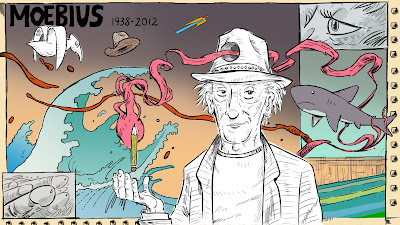