It's about time I post some of my White-Cape work I did for Fantastic Mr Fox.

For all of those who haven't seen the film, White-Cape is the comic book character created by Wes and designed by myself that Mr Fox's son Ash reads throughout the movie.
At the time I was given freedom to design the character in my particular comic book style and create a number of covers and posters as well as some pages of the comic to be included in some of the more salient scenes of the movie.

Like the scene in which Ash forces cousin Kristofferson to sleep under his train set. 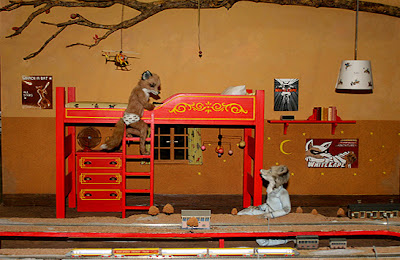 So for the next few weeks I'll be posting some of the White-Cape artwork I produced for the film, included some which never made it in the final cut of the movie and some which was designed for an intended 2D animated section of a White-Cape cartoon that the animal children were meant to be watching. 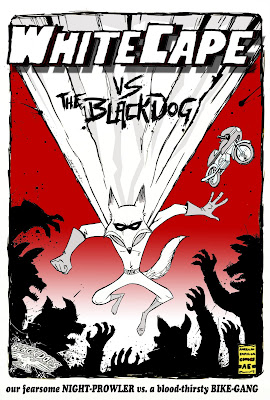 Cool! Did you do any interior pages?

YES!
I drew a 6 page comic complete with back cover so that the prop department could scan it and print it to size for the Ash puppet to use in a couple of scenes in the movie.
In the film we never actually see the inside pages though, although there's a few of them in the Making Of Fantastic Mr Fox art book.

Awesome! Looking forward to seeing them.

Great to see people involved in this fantastic film talking about the creative work involved in it.

Hey, I could talk about this film for hours... have done now many lectures at animation festivals about this over the past year and a half.

Glad you liked it.