The Art of Frankenweenie Exhibition 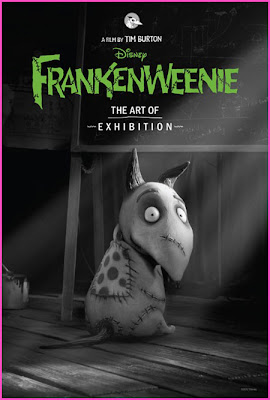 Walt Disney Studios announced that they are launching a touring exhibition featuring the art of Tim Burton’s Frankenweenie, prior to the film's release on the 5th of October, 2012.

The Art of Frankenweenie exhibition will premiere in Barcelona, Spain, at CineEurope, June 18-21, and in the U.S. at Comic-Con 2012 in San Diego, California, July 11-15. When the tour is complete it will have visited seven countries, including Spain, France, England, Japan, Mexico, Canada and the U.S.A.

The Art of Frankenweenie exhibition captures the magic of the filmmaking process, inspired by classic horror movie monsters, and gives audiences an exclusive glimpse into the stop-motion animation process brought to life by Tim.
From original sketches drawn by Burton, to extensive props, sets and puppets, the exhibition showcases the artistic detail and vision that has gone into bringing to the big screen this heartwarming little tale of a boy who, inspired by science and the love of his dog, brings his beloved pet back from the dead.

It was a great pleasure being involved in the creation of such a project. As one of the films' story artists I already witnessed some of the great artistry that has gone into designing and building the props, sets and puppets and can't wait to see this collection.

A clip presented by the lovely Alison Abbate, the film's producer, will give you a glimpse of what the exhibition contains.

clip: The Art Of Frankeweenie

Christian that is amazing! I can't wait for this film. The exhibit isn't touring in Phoenix sadly, so at least I got to see the highlights. Thanks for visiting my blog and I'll definitely be checking out yours!
- Maurice Mitchell
filmsketchr.blogspot.com

Thanks so much Maurice.
All the best